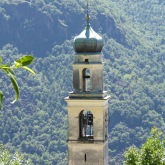 Our home for a week was Casa dell’Ava in the tiny mountain village of Pianazzola 300 vertical metres and a series of terrifying hairpin bends above the ancient town of Chiavenna in Val Bregaglia. As a less than enthusiastic passenger the fact that the village could only be reached on foot before the road was built in 1973 led me to think it would be a good idea to avoid future terror by abandoning the car and walking down the Strada di Mort path to Chiavenna. I was particularly encouraged by reading in the guest info pack that Mrs dell’ Ava had walked down the very same path whilst in labour with her sons (and presumably back up post-delivery) but it was too hot, too steep. A little Piaggio van parked up in the village looked just the ticket for me (easy to jump out of) – then again, the driver had taken the precaution of hanging a lucky horseshoe and a shamrock in his cab, so who knows maybe the locals get scared too? Mr Me was confident and Italian ice cream beckoned so off we went.

Chiavenna is an ancient town with many interesting nooks and crannies to explore …and great ice cream. We came across an exhibition by an English artist, Kim Sommerschield, who has lived in Italy since the 1980’s and whose mountain watercolours are beautiful. 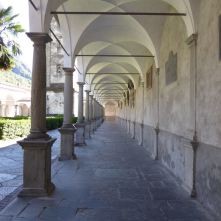 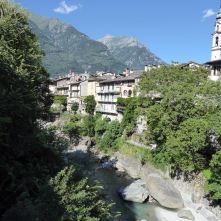 But this is the Tealeaflets after all and tea and cake must be considered. True bliss and the most perfect day were found at Soglio, aka the Gateway to Heaven, only 15 minutes away, over the Swiss border. This is no exaggeration – masters such as Hermann Hesse and Alberto Giacometti were inspired by Soglio. We had lunch at the Hotel Palazzo Salis, restored yet unspoiled, and liked it so much we returned for Assam Herali and Verveine tea with a little Chocolate Cake con Pana Cotta under the apple trees in their exquisite, historic garden. 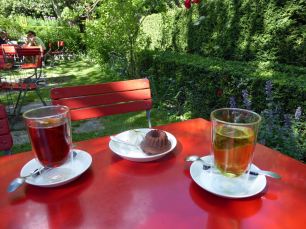 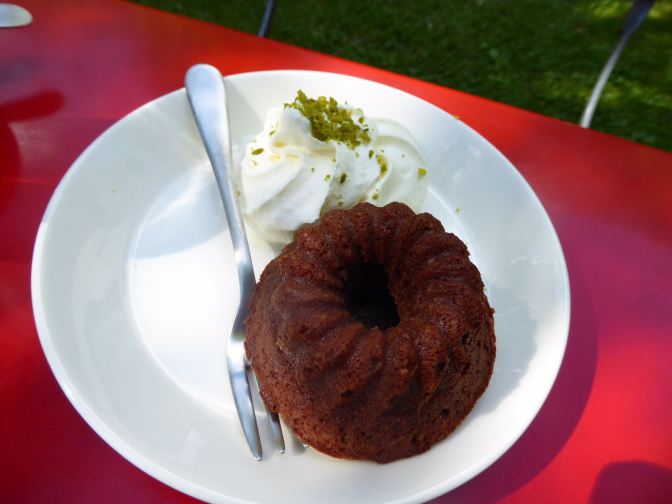 There was not a single thing to dislike about Soglio, unlike our visit the following day to St Moritz which proved a sterile, soulless experience. It was a relief to leave St Moritz behind and return to the balcony of Casa dell’ Ava for a cup of Earl Grey tea and some pretty Crostatine con Frutta and to enjoy the peace and beauty of this incredible place. 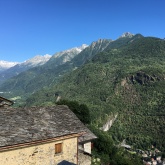